2009 was a great year for me. It was my first year running, actually started in April. My goal was to run a half marathon. I ran two. My first 10K, I placed 3rd in my age group. My second 10K, I placed 2nd. I ran three 5Ks, placing 2nd in my age group on the final one. And I joined a running club.

1. Drink more water. I hate water. It's boring. But I realize that I can't live on coffee and Diet Coke alone. So I will always have water next to me.

2. If I have a bad race, I get 5 minutes to piss and moan about it, then no more. It's an accomplishment no matter what that clock says.

3. Stay focused, but flexible. If I can't make a run on my marathon training plan because of work or family obligations, be flexible and work it in somewhere else, but stay focused.

4. Take rest days seriously. No matter how much I feel like Wonder Woman that day, a rest day is just as important as a long run.

5. Eat my veggies. Just as much as I hate water, I hate those green things. They are boring. I like salads, but cooked veggies bore me. I will look for ways to make them more exciting.

6. Bring healthy snacks to work. No more grazing on junk on the counter or heading to the vending machine.

7. Try not to bore my co-workers so much with my running stories.

9. Despite much hazing from the running club, I am not participating in the push-up challenge; however, I will be doing my own sit up challenge every day.

It's better the second time 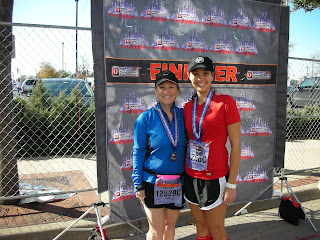 That's what a Twitter friend told me. The half marathon is better the second time. And I have to say it really was for me.

My last blog talked about my determination to not make the same mistakes twice. And being the perfectionist I am, I didn't.

I tried to hold back for the first 6 miles and tried for that negative split. I held back, but no negative split. That nearly 1-mile slight hill around mile 7 or 8 was pretty tough on me.

I tried to pick up the speed when I hit the Katy Trail, the last 3 miles of the race, but it also got more narrow and was difficult to pass people. With a quick look at my Garmin, I knew I was around 5 minutes away from the finish line, but I couldn't see it and really didn't know how far away I was since my Garmin was reading longer than the course was. Then by the time I figured out where the finish line was it was way closer than I wanted to go out full force. And again, a lot of people that I didn't want to get in the way of.

I finished two minutes better than my first half marathon with a personal record of 2:09:41. Wahoo! And this time, I didn't feel awful. My legs still felt good. I didn't feel like crawling up in a ball and laying in the outfield of La Grave Field. I wanted to eat. I was hungry! And I thought, about Oklahoma City Memorial Marathon that I'm signed up for in April 2010. I thought, I CAN DO IT. Train hard, be smart, don't stress and have fun.

In every race, I end up following someone for a good amount of time. I memorize what they are wearing, give them a nickname and try and keep up. Today, a gal wearing a pink sports bra was in front of me, so I named her Pinky.

Not exactly knowing how much is left, I looked at my watch at figured I was about 5 minutes out. Pinky stopped running. Flashback to Fort Worth last month. I stopped running right near the end. I could see the damn finish line and I was done. A gal who was following me for most of the race yelled at me, "Don't you let me beat you!" It was that extra push that carried me to that finish line. She kept yelling, "Go! Go! Go!"

It was my turn to return the favor. I caught up to Pinky and said, "Don't you stop now. You have less than 5 minutes to go. You can do this. You have to finish strong." She looked surprised for a second and started running again with a really forced smile. I grabbed her arm and said let's go, you're finishing strong. She patted me on the back and said, "Thank you. I needed that. You're really good to me."

One of the great people from my running club sent me a very thoughtful email yesterday. He had read my blog and said, "Always remember why we run. Listen to the birds, look at the sites, wave to a fellow runner - and when the day and opportunity arises, run for a PR."

I remembered why I run today. And I hope I made a difference in Pinky's race today.
Posted by Lady Suann at 6:36 PM 5 comments:

Not Making the Same Mistakes Twice

Just 24 hours left until I will be at the American Airlines Center tweeting up with fellow runners for the Dallas White Rock Marathon. This will be my second half marathon. My first marathon wasn't the best experience, but I learned from it and that's what counts.

I ran the Fort Worth Marathon half marathon on Nov. 8, 2009. It wasn't that it was a terrible race, I did well with a respectable time of 2:11:46. However, made three big mistakes.

First, I set my expectations too high. I missed my goal by just under 2 minutes. It was my first big race and instead of living in the moment and being proud of my accomplishment, I spent the next 2 days sulking.

My next big mistake was going out way too fast. I was running a 9 min/mile out the gate until mile 6, then I got slower, and slower and slower, until I hit mile 10 and hit a wall.

My last mistake was not having any Gu. I should have had some at mile 6.

So, the last month, I have been working my tail off, not just physically, but mentally. I have been making it a goal in long runs to not look at that damn Garmin every 2 minutes.

Growing up in a family full of law enforcement guys, I always heard, "Trust your gut. If you feel something, it's probably true. And if it's not, then what have you lost?" Ok, they were telling me this in terms of safety, i.e. if you have a bad feeling about something, then don't go there. However, the same theory can be applied to anything. Trust your gut and so what if I'm behind a few seconds on my pace.

It's not about being a robot, it's about having fun and taking the time out of my busy day to appreciate the little things God's put in our world. I wasn't having fun looking at my Garmin every second and freaking out about time lost. I was missing the whole point. I was missing the crunching of the leaves, the birds flying by, Great Blue Heron's reflection on the lake as he catches a fish. I lost track of all the things that made running beautiful to me.

I can't close this blog without mentioning one other thing that happened at the Fort Worth Marathon that hit me. A runner on the 20-mile race collapsed at La Grave Field after completing his run. They performed CPR immediately, but sadly, he did not survive. I do not know the details of his situation other than he was to celebrate his 50th birthday in a few weeks.

I have not played a lot of sports in my life, but I do have to say that runners share a special bond. While it's an individual sport, I have never felt more support and encouragement from my running club, my twitter friends and people I end up meeting at races. I think this is why this death impacted me so much. You feel like you lost a close friend, even if you don't know them. Let's face it, only another runner can appreciate the appeal of running for several hours!

Tomorrow is a new day and a new race. Will it be a PR? Don't know. I'll have Gary Garmin with me, but I won't stare at him the entire time. Oh, and I'll have at least 4 packets of GU with me. You never know, another fellow runner at mile 10 may need one, and I want to be there to help.
Posted by Lady Suann at 6:31 AM 7 comments:

1. I realized that if I set a goal, work hard and focus, I can do anything.

2. Running is like a drug, once you start, you can’t stop, yet it’s good for you.

4. Runners are nicest people you will ever meet. If it wasn’t for the lady behind me yelling at me and telling me not to let her beat me, I would have quit at mile 11.

5. You learn a lot about yourself.

8. It puts things into perspective. Don’t flog yourself for not meeting your goal. You made it! And I guarantee you, you probably weren’t last. Celebrate the accomplishment.

9. There are really cute running outfits that look good on everyone!

10. You can eat virtually anything you want afterward and not feel guilty. I burned 1,400 calories.

11. It's good for your heart, your soul, your body and your mind.

12. It makes you want to try harder to do better next time.

13. Which brings me back to No. 2, it’s addictive and there will always be a next time. Face it, all the pain was worth it and you want to do it again. Back to No. 12…

13.1 That’s the best damn looking finish line you’ve ever seen and no matter how tired you are, when you see it, you’ll sprint faster than you ever have in your life.
Posted by Lady Suann at 6:20 AM 1 comment: