The first time I saw a tapir was at the Woodland Park Zoo in Seattle. 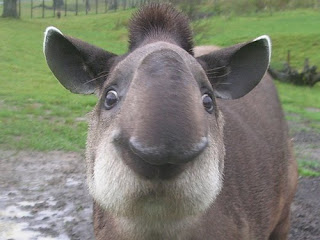 They are awfully cute creatures. The look almost like a cross between a pig and an anteater. The babies are even cuter. 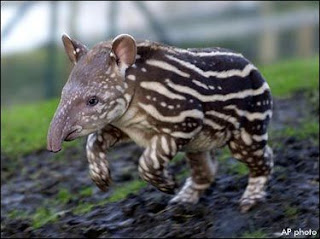 Tapirs are solitary animals and endangered. They are related to horses and rhinoceroses. Their amazing little trunk is prehensile. They are good swimmers, but also enjoy pursuing along the bottom of a river for food. They appear clumsy and slow and are typically shy, but when threatned they will show their teeth and can run with remarkable speed.

I'm quite sure the marathon taper is related to the tapir. You feel clumsy, slow but at the end of the day, you're supposed to be able to run with remarkable speed, right?
Let's hope so because right now, I'm kinda wanting to go to the zoo to look at the tapirs instead of going through this marathon taper.

Hay is in the barn. There is nothing more I can do to get faster before Chicago in two weeks. I'm in the best shape I have ever been in -- EVER. I'm running strong. I'm running fast. All my training points to a serious mother of a PR in Chicago.
There's just one problem. My head. It's playing games with me. I hate my head. There are days it says, "Yeah, yeah, yeah, you can do that. You can run that pace." Then there are days when it says, "What the heck have you been smoking? You do that and you are going to crash and burn. Do you really want that? Don't gamble. Play it safe."
The funny thing about your first marathon is you don't know any better. You haven't personally been introduced to the wall. But when you've met it, you never forget that meeting. I've named him Lord Voldemort -- dark, scary, invisible. He sneaks up on you, smacks you from behind. You're so stunned, you don't know what to do, how to act, where to go. I don't want to see Thou Who Shall Not be Named in Chicago, but I may.
I did a tempo today. I was really hoping this tempo would give me the mental strength I need for Chicago. Honestly, it didn't.
I ran with two from my regular crowd (the Texas Salty Bananas), Charles and Josh. I really leaned on these guys today. It was hard for me to settle into that pace. I wanted to go faster or slower. I felt like my foot was on and off the accelerator the whole time.
Charles is an official Nike pacer for the time I want in Chicago, but I didn't get in a coral and he will be starting in the D corral. Dang it.
I'm not going to have these guys with me in Chicago. It's just going to be me out there. Me vs. Lord Voldemort.
I have two weeks to make up my mind as to how I'm going to run this race. Actually, let me rephrase that. I have two weeks to get my head in the game. I want that time. I need that time. I want it so bad that I can now taste it. I didn't want it that bad two weeks ago. But today, I want it.
Will I see Lord Voldemort out there in Chicago? Probably. But I'm not giving in like I did in OKC. It's not going to be easy. It's going to be a tough fight. It's going to take every ounce of mental and physical strength that I have in this little body. It's going to hurt. I may even cry. But I tell you what, I'm not crossing that finish line thinking, "What if?" What if I pushed harder? There will not be anything left in the tank when I toe that line. Nothing.
I'll see you in Chicago. 10-10-10.
Posted by Lady Suann at 2:42 PM 4 comments: