"We improve ourselves by victories over ourself. There must be contests, and you must win."

I'm my own worst enemy. My biggest issue with the marathon was NOT putting in enough training. It was NOT speed. It was NOT endurance. It WAS that little space between my ears.

I'm a perfectionist. I put a lot of pressure on myself to perform. And when it came time to do that, I melted. You can read about my Chicago Marathon disaster here.

The second I got home from Chicago, before I even set my stuff down, I raced to my computer and registered for The Fort Worth Marathon. I wasn't going to end 2010 that way. I wasn't going to waste 5 months of training when I knew I could do better.

I purposely chose this marathon because it was small (250 people), on the Trinity Trail (familiar turf), and it was home to where I did my first half marathon in 2009. 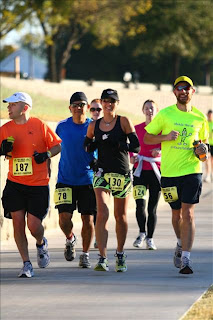 I wanted to minimize any additional stress on me for this marathon. I didn't tell a lot of people. I wanted to keep a low profile. I didn't want to hear people telling me that this was a mistake. I needed to do this. Everyone always says the marathon is just as mental as it is physcial. I'm living proof of that. I needed to prove to myself that I can get out of my head.

My Sunday running buddy Jeremy said he would run with me and pace me. I was elated to have a friend run with me. It would be just like our normal Sunday run.

I couldn't have asked for a better day for a marathon. It was 42 degrees at the start, no wind, warmed up to about 58. I met Jeremy at the start and Sergio was there running his 12th marathon a week after NYC! Stud.

The race advertised a water stop every mile. I didn't carry water, I decided to alternate water/gatoraid every water station. Well that worked for the first two miles. We didn't see another water stop until mile 10. Apparently, the volunteers never got out there. A man running in front of us had called his daughter to bring water. She gave me a bottle of water which I held on to for dear life until we saw more water. Sergio's fabulous wife also brought gatoraid for us on the course!

Somewhere around mile 7 or 8, we met Fred. Fred said he lost his watch and had no idea what he was running. So we invited him to run with us. With a marathon this small, it was really nice to have a group of people to run with. It would have gotten really lonely out there.

Rounding mile 11, Corina and her son were there cheering us all on. It was so nice to have a familiar face. I knew that I would see her on the turn around again and was very much looking forward to that. I yelled out our time and asked her to tweet it. I knew there were a lot of people wondering how I was doing. She said she would see us around mile 20. 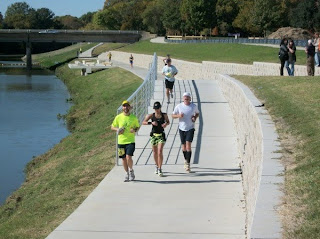 Around mile 19 I was getting a little tired. My left knee started feeling funny. I was really looking forward to seeing Corina again. I held onto that thought and kept plugging along. I saw her and said I was hurting and this is where things start to suck. She encouraged me to keep going strong.

After we passed Corina, I was really falling back. Jeremy kept trying to keep me going. Telling me to run in the crushed gravel to weight off that knee. Then my IT band/hip starting going to crap too. I was shuffling. My stride looked ridiculous, I am quite sure of it. My pace went to crap. It was all I could do to keep going. Everyone says that last 10K sucks. Well, the last 5K REALLY REALLY sucks. 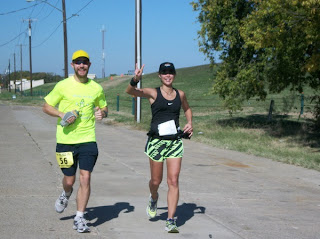 I kept telling myself, just a few minutes. 30 minutes left. I got this. I think Jeremy thought I was talking to him, but I was really trying to convince myself. I was fighting my own head again. I knew I was going to have a hell of a PR. I wished my damn knee and hip felt better, but I kept trying to forget about that and get discouraged and just kept focusing on the posititve. I'm having a good race. This is my day. Nothing is wrong. Keep going. Even if you are shuffling. Keep moving. I walked through the last few water stops, tried to walk once at the last mile, and Jeremy said, "oh no, none of that crap." Ok, ok, shuffle along. He told me to pick up. I said I can't. And I really couldn't. My knee was hurting so bad.

Oh there's La Grave Field. One stupid uphill and then a little down and we're done. I got to the top of the hill and I see Cornina waving and screaming. Yay!!! She ran over and ran us in the last .2! Somehow, somewhere, I found the energy to pick it up. I crossed the finish line strong. However, you can see in the pic, I was clearly having issues with my left side. My entire left arm is doing something really funny! 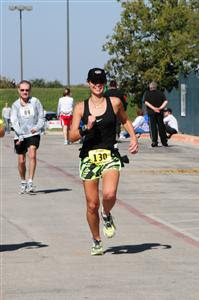 Crossed that line at 4:11:24, a 24-minute PR. I saw my co-workers, my RAW buddies all there waiting for me to finish. And it was amazing.

I had a lot of friends out there helping me. I think almost wanting this just as much as I wanted it. They may not have agreed or understood why I needed to do this, but they supported me and knew I wouldn't rest until I could prove to myself that I could do this.

Coach Jeff: For letting me do something a little crazy and helping keep my head screwed on straight in the process. Always hovering over me like a father making sure I didn't hurt myself.

My sole sisters Marci and Bojana : You girls are my inspiration, my rock when I needed it, my sushi hoes. You have always been there for me and I love you!


Corina: Your support that day means the world to me! I can't tell you how nice it was to have a personal cheering section!

Jeremy: A great Sunday running partner who keeps me running when I just want to give him. Thanks for sticking with me when the going got tough. Without you, that last 10K may not have happened!

Steve: Words cannot even express how much I appreciate your support. You witnessed the crash of 10-10-10, picked up the torn up pieces of my ego and taped them back together. Your support and encouragement over these past 5 difficult weeks has been amazing.

To everyone out there that I may have missed. Thanks for putting up with me, believing in me and following me on my crazy little journey.

What's next? Oh, another marathon. I won this battle, but I still have more to battles to fight.
Posted by Lady Suann at 2:15 PM 6 comments: