Is it in my head?

Fitting verse from one of my favorite bands, The Who.

I ran my last long run for Long Beach today. My friend Josh ran with me. He ran with me all last year and was there as I trained for Chicago. He told me that I was running stronger than he has ever seen me. And I feel fantastic. I ran 20.5 miles today at an easy 9:11 pace. It was effortless. We were talking, laughing about the double rainbow, having a good time. I felt like I could run that pace forever. Then Josh told me the biggest problem I have is the space between my ears. That was not the first time I heard that.

I think I'm getting better. I ran a hilly Milford 30K on a hot, humid day. Usually, I would freak out and piss and moan the rest of the weekend about how crappy I did. The difference, I started the race, knowing how the heat is my enemy and told myself, it's a training run. The result was a decent finish at a 9:30 pace and a much better outlook!

I've got a race strategy. I'm ready.If things don't go my way, I won't keep obsessing over my watch. I'm going to turn it off and enjoy the training run. But I have a feeling I won't have to do that.

Josh - the double rainbow is for you! Wish I had my camera today. 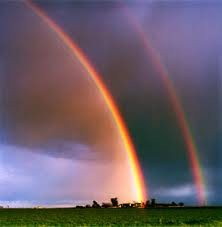 Posted by Lady Suann at 2:21 PM No comments: 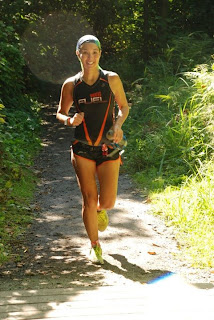 This weekend I participated in my second trail race, The Dash Point Trail Half Marathon. Only having started running on the trails this summer, the number of miles I have put into trail running are minimal compared to what I have put on the road. And living in Texas, we don't really have a lot of hills to train on. So what do I do? I sign up for these trail races in Seattle where they tell you a 2,500+ foot elevation gain in 13 miles is a "flat course." Um, ok, if you train on the Swiss Alps, that's flat.

I had some packing issues, like I forgot contacts. I wear daily disposable contacts and forgot to bring any. I also forgot my sunglasses and any gels. Jeff Webb saved the day with a gel for me and some sun glasses, which I didn't end up needing since it was a fabulous shaded course.

I made a few mistakes in this race. Thinking the race was flatter than it was and the trail was non-technical, I ran in my Saucony A4s. Because I didn't have my contacts in, I couldn't see any detail -- like the roots on the ground. I stubbed my toe a lot! That said, I probably won't race trail in those shoes again. I felt every rock, pebble and root under my foot and it just bugged me.

The race was a 2-loop course, starting with some pretty good climbs. I took the first loop pretty fast 1:16:21. And clearly it was too fast, when I started loop two looking at those climbs was exhausting. The first climb is a set of wooden stairs going over a bridge, followed by a hill climb made easier by some logs as stairs. On loop two, I had to walk up this. I was proud that the rest of the climbs, I ran. Well, I call it running anyway. It was faster than a walk, but probably not as fast as some people can power hike.

Once I got through the climb section, I got my energy back and was able to pick up the pace and felt pretty good. My second loop split was 1:28:13.

Last month, I ran the Cougar Mountain Half Marathon in 3:03. I finished this race in 2:44. While Cougar was a little more in elevation climb than Dash Point, I think I have already made some pretty good improvements. I walked a lot more of Cougar Mountain and got passed a lot at the end. This go around, I did much, much better!

The course was very well marked, well priced and well aided. I would certainly recommend it!
Posted by Lady Suann at 11:20 AM 2 comments:

I'm really digging this trail racing stuff. I've always liked smaller races. In fact after Chicago Marathon I vowed to never do a race that size again. Why? Crowds stress me out. I'm already a mess of nerves on race day anyway. But add the stress of finding the start line amongst 40,000 people, waiting in line for 30 minutes to pee, crowded aid stations, the masses of humanity at the start line, tripping over paper cups, banana peels, and I become agitated, nervous, frustrated, sick to my stomach -- and this is before I toe the line.

What I've found at these trail races is that, many of the races are a few hundred people or less. As reference, my favorite road marathons have been no more than 300 people.

Ever better yet, in trail running, since many of the aid stations are miles apart, it's expected you carry your own hydration. Therefore when you get to an aid station, a majority of the runners refill their water bottles. What does this mean? And why do I see this as a benefit? Well if you have ever run the Chicago Marathon and slipped on a street lined with banana peels, sponges and paper cups, you know what I mean.

The more I race trail runs, the more disgusted I get when I see all this litter and waste at road races. It's dirty. It's gross. It's sad. Really.

I will be participating in the Isle de Bois 50K on December 10. There is also a 10-mile option. This is a CUP FREE race. BYOC. Don't know how to race cup free, read the race director's blog.

Yes, there are challenges. Yes, people will complain. But guess what guys, it's not up to the race directors to make a change. It starts with the runners. Yeah, that's right you. Instead of complaining that the race director didn't have cups, even though it was WELL advertised as a cup-free race, make a commitment to reduce, reuse. Don't throw your gel packets on the floor, use the trash cans provided. Yes, it's sticky and you don't want to put it in your pocket, so what? Isn't it better that you get sticky than a wild animal ingesting your left overs? Let's face it, you're dirty, sweaty, smelly and gross anyway. And sticky to the equation and you're one hawt mess. You can shower later.

I know, you're going to tell me that you're not going to carry your own cup in a 5K race or a road marathon. That's fine. I probably won't either. But let's try to throw our trash in the trash cans provided. Some people will carry their cups well after the aid station and throw their trash in someone's yard. Or their gel packets on the ground. Let's be respectful. You'd be pissed if someone threw trash in your front yard. Honestly in most cases, the nano second it takes for you to toss your cup in the trash, won't hurt your race.

We have a personal responsibility to ensure these beautiful places are here for not only us to enjoy, but our future generations. Let's make it a goal to leave only footprints.
Posted by Lady Suann at 9:30 AM 1 comment:

Texas summers really do a number on my head. My pace is slow. I struggle. I feel like I'm going backward, not forward. Plain and simple, I do not run well in the heat. More than anything, it makes me question my ability, where I am at in my training, and is a serious blow to my self confidence.

Before summer came, I made the decision not to race in Texas in the summer. It does nothing for me but screw with my head. So I'm been racing every other place I've been for work or pleasure this summer. If I'm there and a race interests me, I try to make a go of it.

Last time I was in Michigan, I tried to PR a 10K. Well, it was 87 degrees and 80-something percent humidity and it was a disaster. Like the kind of disaster where you puke all over yourself. At that race, I saw a little flyer for the Milford 30K on Labor Day weekend. Knowing I was going to be visiting Steve that weekend, I kinda wanted to do the racing. Surely it will be cooler, right? BWAAAAHHHH!!!!!! Wrong. So very wrong.

Every time I kept looking at the forecast, it kept getting hotter. Friday night I arrived in Michigan and it was hot and humid. I didn't sleep well because I was so hot.

Saturday morning, race day. It's close to 90 degrees and feels like a damn sauna. I wanted to run a marathon pace run. I felt good, despite some pretty high miles earlier that week and a knee that was acting up.

I went out the gate and knew today was not going to be a sub 9 day. So instead of fighting it and having a miserable race, I told myself to let it go and just enjoy the race. I slowed my pace and took it easy.

I am so glad I did! I loved this race. It was probably the hilliest race I have ever run. It was mostly on dirt roads and so pretty. I powered up all the hills, but one and had a great time. At mile 15, it looked like the Batan Death March. Everyone was walking or shuffling. Yet, I was still running, allbeit a bit slower because it was getting very hot and there was no shade at this point in the race. But I was running, not shuffling! Wahoo! 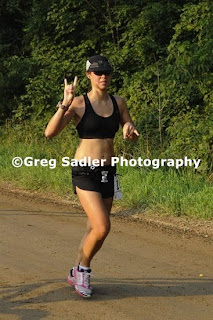 I figured Steve was worried about where I was. Originally, I was targeting a 2:45 finish. It was getting close to 3 hours and he was a little worried and about ready to hop in the car and find me. He was waiting at the finish line with a little surprised look on his face. I overcame the hills, heat and humidity and in the end had a great training run.

Next week, I'm racing the Dash Point Trail Half Marathon in Seattle. Unless the earth suddenly spins out of orbit and lands next to Mercury, I think I'm going to have some good weather!
Posted by Lady Suann at 7:12 PM No comments: