I don't even want to write this post. I want to erase the last 13.1 miles from my mind forever. But because I blog about all my races, I gotta write the good, the bad and the ugly. Well Long Beach Marathon, marathon #6, state #5 was bad and ugly!

I wasn't even going to go. I had a horrendous past few weeks. Caught a terrible cold. My head was not in the game. And I know for damn sure when my head is not in the game, I'm not going to run well. 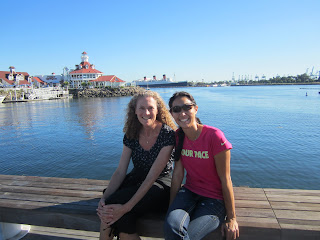 So what went wrong. This was the earliest I have EVER felt fatigued in a race. I ran strong until about mile 10. My legs started feeling heavy. At mile 11, my foot caught a hole in the ground and I nearly fell, grabbing K2. Apparently I have some muscle cuz she has a big shiner to prove it.

Then when I thought it couldn't get worse, my stomach goes bad. Really, really bad. This was the first time when I seriously considered a DNF. I wanted off this course. I was in serious pain. My cramps would not go away. I got dizzy. Then I realized at mile 18 I had stopped sweating. WTH? I was taking in fluids at every water stop, which was EVERY mile. It was not hot by Texas standards. I have run in worse conditions and haven't felt this bad.

My next strategy was "Just Finish." Mr. Kevin Green, your words sang to me that day. Don't care how to get it done, just get it done was my goal. I ran when I could. I walked when I couldn't. I told myself, training run, this is a training run for Rockledge Rumble 50K.

At around 20, I ran into a local who was also having bad day. The heat was really bothering him. We decided to start running together. I lost him after the next water stop because I decided to keep running, allbeit a slow pace.

Ego left when a woman running in Crocs passed me. Really? Oh this is bad. But I actually laughed.

Mile 24, "Chris" and his friend were running in front of me. Chris had a personal cheering section. All kinds of folks cheering him, asking him how he's doing. And the only thing he says for what felt like 30 minutes was "I'm dying. I'm dying. Oh my God, I'm dying." After the 40th "I'm dying," I ran up to Chris and his friend and said, "Dude if you are talking you're not dying. HTFU. The worst is behind you. You have a damn mile left." His friend laughed and said, "I like her, she's tough." 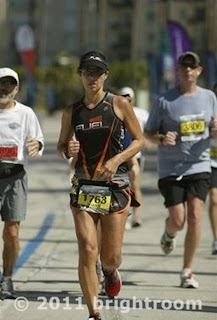 Ok, this may not be my personal best. In fact it's my personal worst. But I'll take the "she's tough" and go with it. I ran 10 miles on the worst stomach upset I have even encountered -- EVER. That is tough. What's tougher? I'm not giving up.

Did I cry? Duh. Of course I did. Did I have a pitty party? Yep. And I want to thank all of you for coming. But the pitty party is over. I'm moving on.

Marathon, you got me again, you bastard. But I'm stronger than you. And I'm a fighter. Until we meet again...
Posted by Lady Suann at 7:53 PM 2 comments:

"If you haven't found it yet, keep looking. Don't settle. As with all matters of the heart, you'll know when you find it. And, like any great relationship, it just gets better and better as the years roll on." -- Steve Jobs

The world was changed by the thoughts & ideas of a man who had the courage to do something he loved.

Too many of us settle. Many of us learn this the hard way through heartache, tears and frustration. It's easier to settle. It's safer.

But isn't anything worth having worth the risk of failing?

Whether it's work, love, life or a marathon promise yourself you'll never settle. Never stop reaching.

Goodspeed Steve Jobs. I promise not to settle.


- Posted using BlogPress from my iPhone

Posted by Lady Suann at 8:28 PM No comments: