Battle to the End - The Duel Dirt 50K

At 29 degrees at the start line, I thought the biggest battle I would be fighting was keeping warm. 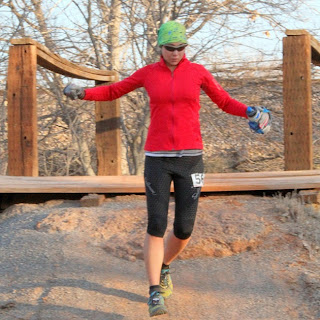 I headed up to Wichita Falls at 0530 for my second 50K, third ultra marathon. In typical Texas winter weather, it was in the 70s the day before. I knew a cold front was coming in, but the weather forecast said a high of 54 degrees.

At the last minute, I ran back in the house and grabbed my Solomon 3/4 in compression tights and Solomon jacket. Turned out to be a good move, as I was wearing a singlet and shorts! I realized when I pulled into town that I would seriously freeze my tooshie off dressed like that!

The race is ran on the Wee-Chi-Tah Trail, which ironically parallels the BNSF main line. The trail is not technically difficult and has some great flat parts where you can really fly. But there is a section (which us ultra runners got to run not once, not twice, but three times) that contains some short steep ups hills, hairpin turns, suspension bridges, a barn and some half pipes.

My running buddy Josh, returned to defend his marathon title win from 2011. We wished each other luck at the start and off we went.

I took the first five miles pretty conservatively. I was chatting with a person who flew in from Denver and was training for Leadville. We swapped a few stories and I decided to pick up the pace. Soon, I came up to the pack of lead women and a few boys. After following the pack for a bit, I decided to work my way up.

Feeling really strong, I took the lead and pulled away from the other gals. In the back of my head I thought, shoot this is really early in the race to do this. Are you messing up? 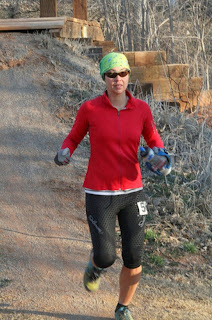 My nutrition plan was to take in most of my calories through liquid. The mix I had was 250 calories for my 20 ounce bottle. I ended up taking in only 250 for that half marathon -- about half of what I planned. I grabbed my new bottle at the half and decided to grab a few fig newtons for more calories. There was nothing at the aid stations that I have ever had in an ultra -- pretzels (which I hate because they are too doughy), gummy bears (too sweet), PBJ (never sits well with me in a race), Snickers (haven't tried that one yet) and fig newtons.

That fig newton was the death of me. I think I ate one and a half, spit the rest out. It wasn't long before my stomach acted up. I really had to slow my pace. I grabbed 4 papaya enzymes which helped take the edge off, but I knew a port-a-potty would be in my future. Around mile 15 or 16, I spent a few minutes cursing that fig newton in the port-a-potty.

I started to feel my energy draining. I grabbed a snickers to see if that would help. Around mile 21, my tummy hurts again. I popped six more papaya enzymes. Miraculously, I'm still lead female. I figured by 21, I would have lost my lead. I knew the gals were catching me.

I think it was about here, that I kissed some Wee-Chi-Tah dirt and fell. Picked myself up and kept going. I thought, girl if you are in the lead, you are running no matter what.

I was certainly losing energy and speed. I hit the full marathon around 4:15. I lost the lead right at the end, around mile 28. I wished Tammi well. She was running strong and I was fading. Thinking I could slack off a little, I hit the last .50 miles and realized the next girl was not far behind. Time to pick up that pace. 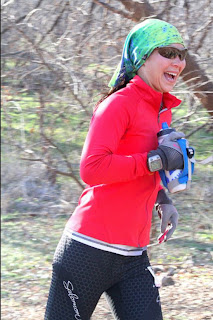 This was my last long run before Rocky Raccoon 50M. It gave me a good idea of how I want to run that race and how I need to fuel.

On the road to Rocky. See you in two weeks!

Here's a story on Endurance Buzz about the race.
Posted by Lady Suann at 7:11 PM 3 comments:

I've always been a sucker for animals. I adopted Gandalf the Grey (my Russian Blue kitty) 7 years ago. Five years ago while filming out on the railroad tracks, I found a 1-pound kitten by herself. I was going to find a home for her. Yeah, you know how that ended up. She's 20 pounds and I live in her home.

Then came Flash the 9-year-old stinky, but lovable Basset Hound.

My ex-husband thought our son needed a lizard a few years ago. I was thinking gecko. They are cute, little. I could handle a gecko. While at the pet store, he proclaimed, "geckos suck." My son repeated, "Yeah geckos suck." So the cute 4-inch bearded dragon came home.

The cute 4-inch bearded dragon soon outgrew his cage. We got Spike a new mansion complete with heated rock and faux rock walls. Very posh. He has grown to about 16 inches. And has quite the tough guy appearance.

Of course, I ended up with the menagerie in the divorce.

Marshall is with his dad this week. Yesterday, I ran a marathon, took a nap, decided to head to Petsmart to get two dozen crickets for Spike. I threw in some meal worms. Why not? It's the holidays.

A sudden fear of death enters my mind. Did he die? Oh my god. What am I going to tell Marshall. "Hey Marshall, your mommy killed your lizard while you were at your dad's house."

"Spike. Buddy. I got you crickets." Silence. I study the reptile closely for any signs of breathing. There is none. My heart rate suddenly soars. I feel like I'm racing the last .2 miles of that marathon again. But there's no medal for killing your son's lizard.

Now there's the issue of how to remove the lizard corpse. I will not touch the lizard when it's alive. The thought of removing a dead lizard sent chills down my spine. I texted my ex, "Spike is dead. Need assistance with lizard corpse removal." No response.

Ok, I think the body will be ok until tomorrow. Surely I can find someone who will remove lizard corpse on New Year's Day.

I went to the running club this morning for the annual New Year's Day recovery run and breakfast. Having this conversation with my running buds, Danyah reminds me that the body needs to be disposed of relatively quickly before it starts smelling bad.

A rush of panic comes to my brain. Oh dear god, I'm going to go home and my house is going to smell horrendous. I feverishly start texting anyone who has ever owed me a favor. Then I offered Chelsea (Marshall's babysitter who is home from college) $20 to dispose of the body. She jumped at the chance.

Text from Chelsea: "Wait, it's organs are still inside it's body right."

Chelsea comes over and Spike is in the same position, laying flat, front legs tucked behind him, eyes closed, not breathing. She has the same reaction I do. It freaks her out.

"You're lucky I'm desperate for money," Chelsea explains. I hand Chelsea the tongs and casket (a Tory Burch shoe box).

"Maybe we should get a bigger box," I say.

"I would want to be buried in that box," Chelsea notes. "Maybe we should put some paper towels over him."

I grab a few plastic grocery bags. After a few minutes of waving our arms in the air and squirming at the thought of this thing, I hold the casket and Chelsea throws the plastic bags in the cage.

"I don't think he'll fit in this box. We'll have to fold his tail," I say thinking has riger mortis set in? Is he stiff?

And at that moment, I'm not sure what exactly happened. He may have moved a bit. But both Chelsea and I screamed.

"HIS EYES ARE OPEN!!!!" Chelsea screams.

Quickly she removes the plastic bags from the cage. I got the crickets out and dropped a few in front of him. He ate about 8 or 10 of them, but was not moving to get them.

"He doesn't look good. When do you go back to school," I ask Chelsea.

In my mothering scolding tone, "You hear that Spike? If you are going to die, you need to do that before January 15th."

Chelsea helped me put my Christmas tree away and I gave her the $20 and said I'm paying her forward.

I'm thinking of changing Spike's name to Jesus. I swear he was dead. 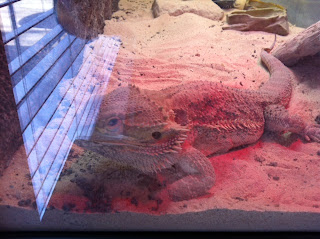