Grasslands Trail Marathon
March 24, 2012
5:49
Mud. Heat. Heavy legs. Shitty (cow shit everywhere).
I had been warned about how shitty this course was. However, they weren't talking about all the cow shit I had to dodge. They were talking about the sand, the heat.
With several days of rain last week, the course was not the usual sand. It was mud and muck for the first loop (white trail). When we hit the second loop (blue trail), it was just exposed and hot with temps in the 80s.
I wasn't going to run this race, but I needed the miles for Zion training. All my friends were headed up there, so being the lemming I am, I got in on the waiting list for the marathon and got in. 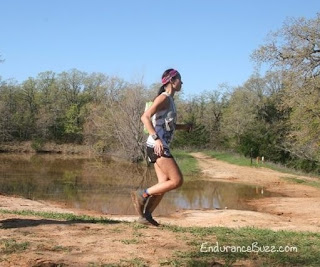 My buddy Chris and I decided to run this one together. She's just getting time on feet in prep for Boston and really didn't care what her time was. Having a pretty strong training week, my legs were feeling pretty heaving with 4 strong runs in a row leading up to this.
The morning was nice and cool. The marathoners start on the white trail, back to the start and then finish up on the blue trail. The white trail was nice and shaded. But the mud was frustrating. It was much more slippery than Rocky Raccoon. Flash backs of Cross Timbers and knee issues haunted my brain. Several times, I stopped to kick the 4 pounds of it off my shoe.
Of course, my tummy acts up starting with the first few miles. We hit the second aid station where my buddy Jack was working. I was praying for a port-a-potty and he said, oh about 6 miles when you get back to the start. Ugh.
That was a long 6 miles.
I had never been more happy to see a port-a-potty, ever.
Saw Josh working at the aid station, told him about my tummy and he offered me a fig newton -- ass.
I did start feeling much better and Chris and I took off for the last half on the blue trail. It really started warming up and this section has zero shade. It was shitty, literally. Unbelievable amounts of cow shit. Why do they shit ON the trail. Really? You have thousands of acres and you shit on the trial.
Then my stomach acts up again and I'm thinking how great it would be to be a cow right now....
Chris and I are coming down the last mile and stop Martin (who ran the half) coming up the trail. I'm sure searching for me wondering if I had died and fell in cow shit. My first thought was how is he possibly so damn clean? We look like we took a mud bath. Could have sworn he didn't run it.
So 5 hours and 49 minutes later, Chris and I crossed the finish line together. Pleased that it's over. Pleased I didn't fall in cow shit.
Old Suann would have pissed and moaned about having a nearly 6-hour marathon. New Suann is just damn glad it's over and a 26 mile training run is in the bag.
Running in exposed heat was good training for me going into Zion. The course is very exposed and the temps could climb. I handled the heat well. Most importantly, no knee issues.
Moving forward, I need to get my nutrition in check and fix this stomach. Oh and log big miles.
Posted by Lady Suann at 9:27 AM 1 comment:

How long will that take you?

Do you stop and sleep?

Where do you go to the bathroom?

The list goes on. If you're an ultra runner, you have no doubt been inundated with the same litany of questions. And at some point, you just get tired of trying to explain it all.

But the truth is, I don't have a compelling answer as to why I want to run 100 miles. Because I can? Is that good enough?

So my dear ultra running friends....why do you want to run 100 miles? Maybe I'll use one of your lines when I fell compelled to explain myself.
Posted by Lady Suann at 9:54 AM 7 comments: