I've grown to hate the marathon distance. It's turned into this odd distance where I just haven't figured out how fast I can run it. Throw in a difficult trail race and I'm all goofed up!

Martin agreed to pace me at the Rough Creek Trail Marathon. We talked about aiming for an average 11:00 pace. This seemed logical, but we underestimated the hilly section, called the Rusty Crown.


The marathon is 2 loops. And other than the 3.5 miles of the Rusty Crown (x2), the rest of the race is pancake flat. This proved to be a challenge for me. The long flat sections felt boring, slow and tedious to me.

We came in off the first loop around 2:32. Right on schedule from what we originally planned. But the problem was my hamstrings were barking. It was only half way through the race and my legs were toast.

The top 4 of us girls all came in around the same time. I had a slight lead up until the last 2 miles on the flat section where my friend Chris took the lead.

Heading out for loop two, Martin told me, there's good news and bad news. The good news is the average pace we wanted is right on. The bad news is the course is longer than we both thought.  I told Martin my legs were really tired already. He said his were too.

My nutrition was better that it has been, but still not perfect. I put Hammer gel in a flask and sipped on it for the first loop. I did not finish my planned 500 calories of gel. But I did have some fruit at the aid stations.

Coming into the first aid station on loop two, I was feeling like I was bonking. My second gel flask had Espresso Hammer gel and I just didn't like it. It was too thick and was not coming out of the flask easily. And I was sick of gel.

Other than fruit, there wasn't much of anything I could eat at the aid stations. I'm a big potato chip eater. And I love tortillas and ham or white bread with some ham -- neither option was available. So I ate a few orange slices and took a handful of grapes and got ready to climb.

While I was climbing very strong on my first loop, my energy was zapped and my hamstrings were too.

Somewhere toward the end of second trip to the Crown, I lost my 3rd place spot as I was struggling up the steeper sections. I took a bit of a tumble.

I caught up to Martin and said, "I'm tired, hungry and my legs hurt." He later told me, "There is no whining in ultra running."

We decided I needed to tank up at the Rusty Crown aid station as soon as we got down the Crown. I dumped my water bottle and filled it with about 8-10 ounces of Coke, ate a bunch of fruit, filled up my bottle and headed out.

Here's the crappy flat part that I hated. I actually liked the Crown because while it was steep, none of the climbs were long and were followed by a good down. This flat stuff just felt slow and boring to me. 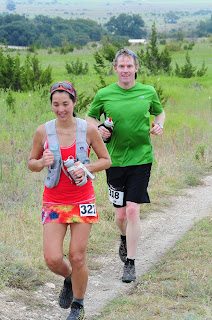 I knew I couldn't catch up to the girls as they were really pulling hard on the flats where at this point, I told Martin, if I'm running the rest of the way to the finish, I'll be happy.

We plugged along and hit the final aid station, more Coke and fruit and we were off for the home stretch.

Martin said, there's no one near us, but I don't think we should slack off. I said, no, I came here to run an 11 pace and I want to at least finish at that pace.

Nearing the finish line, he told me less than a mile. I couldn't see any females near me, but I asked him to look. I told him I lost my podium spot, but I'm not losing my spot now and don't want someone barreling on the flats to surprise me.

Dave put on another fantastic race. The course was well marked, a ton of great smiling volunteers and the usual great grub. But as I told Martin about 100 times before the race and several times during the race, "I want Hammond's BBQ!" So we took off and got me my BBQ. Thanks Sweetie!

Thanks to all the volunteers and Dave! Fun day on the trail! The weather could not have been better - mid 70s and overcast. Loved it! 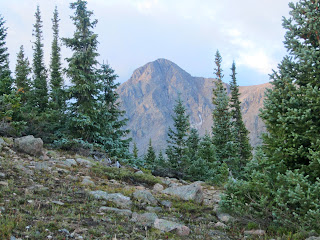 Mt. of the Holy Cross is one of the lowest 14ers in Colorado. But what it lacks in height, it makes up for in beauty.

This mountain took my breath away (literally at times). At 11.5 miles, it's a long day's journey.

Feeling stressed for starting late the day before and missing a summit because I was nervous about the weather, we got up super early for our 1:30 drive from Leadville and hit the trail just after 6 a.m.


I felt pretty strong this day. But the hardest part for me was the last two miles. The last mile is a lot of scree. It took me 90 minutes to make it up!


I have to say it was worth it all -- getting stuck in a rock, scraping my knee and ripping my tights -- that was all soon forgotten when I reached the summit. 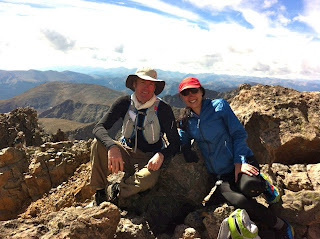 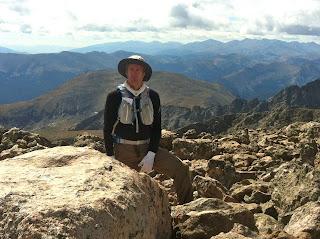 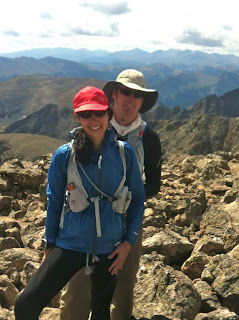 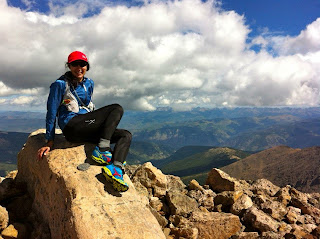 Four hours and 39 minutes later, I was sitting on top of Mt. of the Holy Cross. It was stunning. The weather was amazing. I wanted to sit up there forever.

Martin and I ran into a couple who did a midnight start. Their plan was to summit before sunrise and watch the sunrise, but they got sidetracked with a nap and missed the sunrise. This is definitely something we are putting on our list.


﻿﻿
﻿﻿
On our flight out, I was reading The Last Breath: A Memoir of Going to Extremes by Francis Slakey. He discussed a life changing moment for him. He was held at gunpoint in Indonesia on his way to a climb. Like always, he had managed to escape what could have been a deadly situation. Not long after he returned from his climb, he picked up a newspaper in Bali. What he read next forever changed him. A group of American teachers were ambushed and gunned down. He realized it could have been him.

But yet, we live in a country where you CAN climb up a mountain and run in the woods without fear of being ambushed or gunned down.

“If you get to the end of your life and you have regrets that you could have done better, then you blew it,”  Francis Slakey.