Another year older, another mountain climbed. Martin and I have made it a little tradition now to celebrate my birthday by climbing a mountain.

Last year, I struggled, gasping for air making my way up Mt. Massive. I would play games like, ok you walked 20 steps, you can take a break.

A year later and a few more mountains under my belt, we decided to head to the San Juans and hit Colorado's most remote 14ers.

The journey to the mountains themselves is a treat. The only way to get to the Needleton trailhead is to take the Durango and Silverton Steam Train. It's about a 2 hour and 30 minute ride.
After the train drops you off, you have a 6.5-7.5 mile hike into the Chicago Basin. Climbing 8,200 feet to 11,100 feet, it's a steady incline and quite a workout carrying 25-30 pound packs!

We found our camp spot of choice about 7.5 miles in, and called it home for the next few days.

I have been wanting to see mountain goats every trip to Colorado and never have seen them. I read that you won't have a problem finding them here. I got giddy when I saw my first mountain goat! As we soon learned, there were more goats than mosquitos.

The grand plan was to hike in and then bag Eolous (Class 3). Then get up really early and try to hit Windom (Class 2+) and Sunlight (Class 4). The hike in took us longer than we thought, plus we had to set up camp, filter water, etc. We decided about midway, let's just take it easy in and then maybe try to hit all three in the morning.

The alarm goes off at 3 a.m. and I promptly shut if off. My head felt like it was going to explode. The altitude headache got me. Martin said, let's just wait until sunlight and go from there.

We got up around 6, had some breakfast and coffee. The headache was a little better, but still there.

We decided to head up to Windom first and then assess what we could do from there. 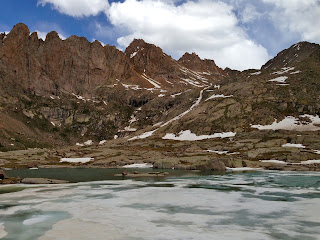 Once we hit Twin Lakes, the ascent to Windom gets hairy. It's a tough scramble the rest of the way. The carins are not very visible. You just have to pick your line and keep going up. The snow made things a bit more challenging as well.

After 4 hours, and one giant leap of faith (literally), we made the summit. I had a panic attack (literally) on the last step. It was exposed and a scary step. Martin grabbed my hand and I took the leap. I promptly sat down and hyperventilated. I was shaking and just needed to sit for a little bit to calm down.


The coolest thing was there were only 5 of us on the summit that day! We had a mountain to ourselves. It was amazing.

I did great on the descent. I have perfected the crab walk. I get on my butt and put my hands down and descend like a fast little crab. Hey, it works. However, I have holes in my new climbing pants.

We took an interesting way down to the lakes and decided to hang out at the lakes before we headed back to our camp. Out of the corner of my eye, I saw a herd of goats off in the distance. I told Martin, I hope the come over here! Sure enough the herd of 20 made their way other to us. I call them my birthday chorus!

They really have no fear of humans. I think they are just as curious about us as we are to them. They kept making their way closer to us. I decided to tell them that was close enough!

We talked to the other hikers who also summited Windom about Eolus. There was some snow on the traditional route where you really needed crampons and axes, neither of which we had. Or you could take the ridge (which is more exposed and harder). We thought about getting up early the next day and getting as far as we could before hiking out.

We fell asleep before the sun went down. I wanted to see the stars. Martin tried to wake me up to see them and I muddled something and was so tired and my head hurt so bad, I just kept my eyes closed.

Again, I turned off that 3 a.m. alarm. This time, I was dealing with some nausea. Instead we slept in, had a leisurely breakfast, napped again and then broke down camp and headed out for our 7-mile hike to the train.


It's not about seeing how many mountains I can climb or how fast I can climb. It's not about how successful I am at work, at running, or whatever. Heading the mountains is a way to disconnect with the constant barrage of information overflow. It's about respecting and experiencing the wonders of life and nature--seeing things you can never see from your corner office window.

"Keep close to Nature's heart...and break clear away, once in awhile, and climb a mountain or spend a week in the woods. Wash your spirit clean." - John Muir.

Posted by Lady Suann at 9:28 PM No comments: